Introduction
Concurrent with Passover is Chag HaMatzot, or the Festival of Unleavened Bread, when no chametz may be eaten or possessed for a full seven days:

During the month prior to Chag haMatzot we clean our homes of all possible chametz (products or residue which might contain leavening such as bread, crumbs etc.). This culminates in the Erev Pesach ceremony of Bedikat Chametz, when the last vestiges of leaven are removed from the house. For the entire week of Chag HaMatzot we are not to have any leavened products in our homes, nor are we to consume any leavened products outside our home. We are to be "leaven-free."

Chametz is considered a corrupting influence, a hidden uncleanness that manipulates purer elements. Like the influence of a lump of leaven in a batch of dough, "spiritual" leaven functions as an evil impulse within us that corrupts and sours our soul.  As such chametz is considered a metaphor of sin which we are commanded to put away from us. The removal of chametz is a metaphor of our sanctification.

When is Chag HaMatzot Observed?
Since the Jewish calendar reckons the start of a day at evening, it is sometimes confusing determining when a festival begins and ends. For example, Passover begins on Nisan 14 at evening, that is, between 3:00 pm to sundown, and continues through Nisan 15. Strictly speaking, then, Passover begins on Nisan 14 and continues through Nisan 15.

In Exodus 12:15-20 God instructed the Jews to eat unleavened bread for seven days, beginning on the first day of Passover, from Nisan 15 through Nisan 22. Chag HaMatzot therefore represents a holy week spent without leaven in our lives, a picture of our deliverance from the corrupting influences of the world in response to the redemption of the LORD (Matt. 16:12; Mark 8:14-15; Luke 12:1; Rom. 6:13-22; 1 Cor. 5:6-8).

Note that in modern Judaism, Passover and Chag HaMatzot are collectively considered as a single holiday, usually referred together as "the Passover." On the day following the Passover Seder (i.e., the first day of Chag HaMatzot), services are held at the synagogue. Days 2-6 are known as chol haMo'ed - intermediate days during the festival when work is again permitted but the holiday attitude sustained. On the last day services are again held at the synagogue, but normal work is not allowed since it is a Yom Tov (holiday).

The Meaning of Unleavened Bread
In Scripture matzah is sometimes called "the bread of affliction" (Deut 16:3). However, it is not "of affliction" because it is unleavened but it is unleavened because it had been born out of affliction. In other words, since the Jews had no time to prepare their bread on account of their affliction, the bread had no time to rise. The matzah, then, is not so much the remembrance of bondage as of the deliverance from bondage, and that which had originally been of affliction now became, on account of God's deliverance, the token of freedom...

Matzah also represents purity, since chametz is a metaphor of sin. None of Egypt's leaven was to pervade it; all the old leaven was to be entirely purged from their homes and lives. Chag HaMatzot, then, both memorializes Israel's deliverance from a life of slavery under Pharaoh after the sacrifice of the Passover lamb, but it also represents the Christian's deliverance from a life of sin under Satan after the sacrifice of Yeshua the Mashiach, the "Lamb of God." The prophetic and symbolic lesson of ridding your life of the leaven of Egypt is that you get rid of sin and replace it with purity and humility. Upon redemption, we are to become a sanctified, "unleavened people."

In 1 Corinthians 5:6 we read: "Your glorying is not good. Know ye not that a little leaven leavens the whole lump?" Sin has a "leavening" influence upon the soul: you simply cannot include a little sin in your life without it affecting your whole spiritual life. Hidden sin (i.e., hypocrisy) spreads like spiritual corruption throughout the body and will eventually be exposed. As Jesus has said, "Nothing is hidden that will not be made manifest, nor is anything secret that will not be known and come to light" (Luke 8:17).

Cleanse out the old leaven that you may be a new lump, as you really are unleavened. For Christ, our Passover lamb, has been sacrificed. Let us therefore celebrate the festival, not with the old leaven, the leaven of malice and evil, but with the unleavened bread of sincerity and truth. (1 Cor. 5:7-8)

Here the apostle Paul enjoins you to undergo your own inward bedikat chametz and become a "new lump" - that is, a new substance that is untainted by the sour and rotting influences of your past life. Since the Mashiach has been sacrificed as your Passover Lamb, you are a new creation, made "unleavened" by the power of the Holy Spirit. Therefore put away from you the old nature - the yetser ha'ra - and purge from you the old leaven of Egypt that inwardly cankers you and makes you sick. Walk without hypocrisy in the truth of the love of God for your soul. Amen.

Leaven and the Sacrifice of Yeshua
Traditionally the "leaven package" is burned at the time of morning prayer on Nisan 14 during the Bi'ur Chametz ceremony. That is the exact day in which the Mashiach Yeshua was crucified, removing our sin and spiritual leaven forever. Baruch HaShem. 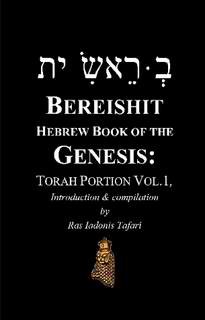 Genesis 7 | In Amharic and English (with Amharic MP3)

Genesis 27 | In Amharic and English (with Amharic MP3)

Genesis 39 | In Amharic and English (with Amharic MP3)

Genesis 45 | In Amharic and English (with Amharic MP3)