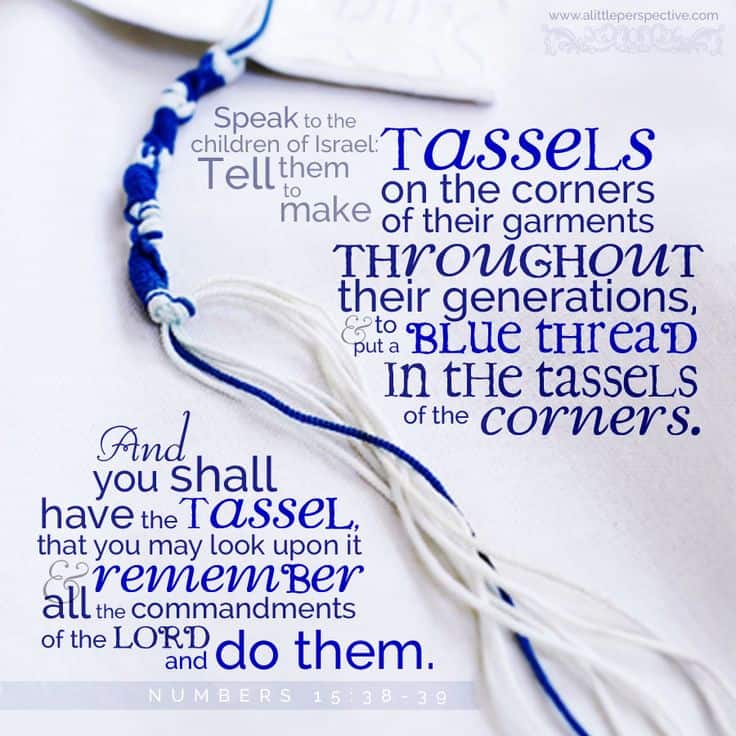 Below are some Scripture references regarding the wearing of fringes in the four corners of our garments. I look at the fringes kind of like a wedding ring. They are a sign of my covenant with my creator. Yahweh knows that we are forgetful people and sometimes we need physical reminders about our covenant with Him. They remind us to walk as we ought to walk (according to the commandments of Yahweh!)

Mark 6:56 tells us that "whithersoever he (Yeshua) entered, into villages, or cities, or country, they laid the sick in the streets, and besought him that they might touch if it were but the border (wings, hem, Hebrew: tzitzit) of his garment: and as many as touched him were made whole.
The Torah commands us to wear the tzitzit, which are fringes or tassels, at the four borders (Heb: tzitzit - corners, wings) of our garments. This is to be a reminder to keep the commandments of Yahweh.

Here's what the Scripture says about the wearing of fringes:
Num.15:37 And Yahweh spake unto Moses, saying, 38 Speak unto the children of Israel, and bid them that they make them fringes (Hebrew: tzitzit) in the borders (Heb: Kanaph - corners, wings) of their garments throughout their generations, and that they put upon the fringe of the borders a ribband of blue: 39 And it shall be unto you for a fringe (tzitzit), that ye may look upon it, and remember all the commandments of Yahweh, and do them; and that ye seek not after your own heart and your own eyes, after which ye use to go a whoring: 40 That ye may remember, and do all my commandments, and be holy unto your Elohim. 41 I am Yahweh your Elohim, which brought you out of the land of Egypt, to be your Elohim: I am Yahweh your Elohim.

Deut. 22:12 Thou shalt make thee fringes (tzit-tzit) upon the four borders (Heb: “Kanaph” - corners, wings) of thy vesture, wherewith thou coverest thyself.
Read the following prophecy in Malachi chapter 4.
Mal 4:1 For, behold, the day cometh, that shall burn as an oven; and all the proud, yea, and all that do wickedly, shall be stubble: and the day that cometh shall burn them up, saith Yahweh of hosts, that it shall leave them neither root nor branch. 2 But unto you that fear my name shall the Sun of righteousness arise with healing in his wings (tzit-tzit); and ye shall go forth, and grow up as calves of the stall. 3 And ye shall tread down the wicked; for they shall be ashes under the soles of your feet in the day that I shall do this, saith Yahweh of hosts. 4 Remember ye the law of Moses my servant, which I commanded unto him in Horeb for all Israel, with the statutes and judgments. 5 Behold, I will send you Elijah the prophet before the coming of the great and dreadful day of Yahweh: 6 And he shall turn the heart of the fathers to the children, and the heart of the children to their fathers, lest I come and smite the earth with a curse.

The Jews believe the Sun of Righteousness would be the Messiah, who would have the power to heal who ever touched the tzitzit (fringes) on his garment.

The fulfillment of this prophecy by Yeshua is found in one of the best known miracles of healing that He performed. This was the occasion when a woman who had suffered from an issue of blood for twelve years came up behind him and touched the hem (border or wings) of his garment where the tzitzit were and was healed. She expressed her faith in Yeshua as the Son of Righteousness with healing in His wings (Hebrew: tzitzit). Both Matthew and Mark tell us about this incident below. Mark further tells us, that wherever Yeshua went, all who merely touched the border of his garment were made whole.
Matt 9:20 And, behold, a woman, which was diseased with an issue of blood twelve years, came behind him, and touched the hem (border, wings, Hebrew: tzitzit) of his garment: 21 For she said within herself, If I may but touch his garment, I shall be whole. 22 But Yeshua turned him about, and when he saw her, he said, Daughter, be of good comfort; thy faith hath made thee whole. And the woman was made whole from that hour.

Mar 5:25 And a certain woman, which had an issue of blood twelve years, 26 And had suffered many things of many physicians, and had spent all that she had, and was nothing bettered, but rather grew worse, 27 When she had heard of Yeshua, came in the press behind, and touched his garment. 28 For she said, If I may touch but his clothes, I shall be whole. 29 And straightway the fountain of her blood was dried up; and she felt in her body that she was healed of that plague. 30 And Yeshua, immediately knowing in himself that virtue had gone out of him, turned him about in the press, and said, Who touched my clothes? 31 And his disciples said unto him, Thou seest the multitude thronging thee, and sayest thou, Who touched me? 32 And he looked round about to see her that had done this thing. 33 But the woman fearing and trembling, knowing what was done in her, came and fell down before him, and told him all the truth. 34 And he said unto her, Daughter, thy faith hath made thee whole; go in peace, and be whole of thy plague.

Then the Scriptures tell of others who touched but the hem of his garment and were made whole!

Mar 6:54 And when they were come out of the ship, straightway they knew him, 55 And ran through that whole region round about, and began to carry about in beds those that were sick, where they heard he was. 56 And whithersoever he entered, into villages, or cities, or country, they laid the sick in the streets, and besought him that they might touch if it were but the border (wings, hem, Hebrew: tzitzit) of his garment: and as many as touched him were made whole.
Remember the commandment in Numbers 15, "when you see it - tzitzit - you will remember the commandments of Yahweh to do them."

Modern day Jewish men still keep part of this commandment by having the tassels (fringes) on the corners of their tallit or tallit katan, but most will not use the blue thread because it became too expensive to get a certain type of blue dye that the rabbis thought it should be, therefore they wear only white tzitzits. BUT, I like to keep it simple. The Scripture never says what type of material the threads should be made of. It also doesn't say it could only be one specific color of blue. I believe that we ALL should obey the Scriptures and wear the fringes with a thread of blue in them to be in obedience to the commandment.

We believe the fringes/tzitzit are to be worn by all of YHWH's people (men, women, and children). The Hebrew word translated as children in these verses is Bnai. Bnai is used when speaking to any group of people with even one man in the group. Therefore, if I were speaking to 500 women and 1 man, I would address them as Bnai. Anyone who considers themself to be a child of Yahweh, the Elohim of Israel, is called Bnai Yisrael. This same application of the word Bnai applies to almost all of Yahweh's commandments. For example, it isn't only the men who are commanded to have a Sabbath rest or keep the clean food laws. All of Yahweh's children are to do these things and in turn recieve the blessings that come through obedience.

You are not following Jewish tradition by wearing the tzit tzit. You ARE obeying Yahweh as commanded in the Torah, just as the Messiah obeyed and you are walking in the footsteps of the Messiah! The more you are willing to obey, the more you will understand His word.

If you'd like to make your own set of tzitzit, we have included the instructions below for making your own.

2. Tie a double knot about 6 inches out, then take one blue cord and make 10 wraps around all the other cords. This symbolizes the first letter in His Name. [10 = Yod (Y)],

3. Tie another double knot, take blue cord and make 5 wraps around all the other cords. This symbolizes the second letter in His Name. [5=hey (H)],

4. Tie another double knot, take blue cord and make 6 wraps around all the other cords. This symbolizes the third letter in His Name. [6=waw (W)],

5. Tie another double knot, take blue cord and make 5 wraps around other cords. This symbolizes the fourth and last letter in His Name. [5=hey(H)],

YOU'RE DONE with one tzitzit!! Now make three more! And every morning when you put them on, ask Yahweh to help you to obey His commandments. He is faithful to bring His commandments to our remembrance, but we must hide them in our hearts by reading them!

Disclaimer: This article may be provided by a third-party source. Providing a third-party article on rastafarigroundation.com indicates that we stand behind the content of that particular article, but it is not an endorsement by RasTafari Groundation of the author's opinion, lifestyle or work published elsewhere. 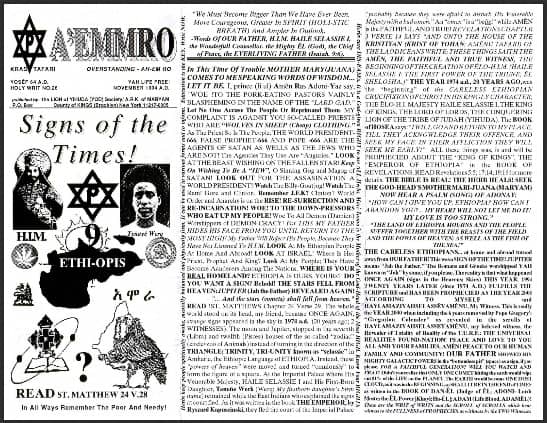 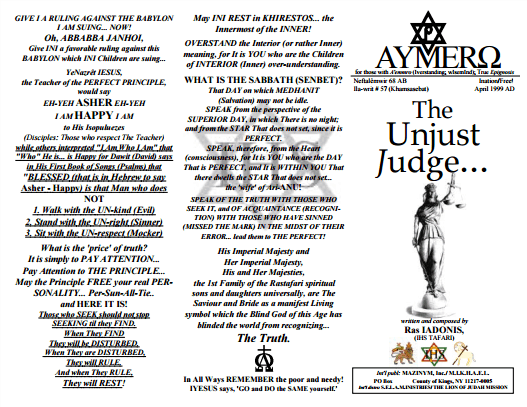 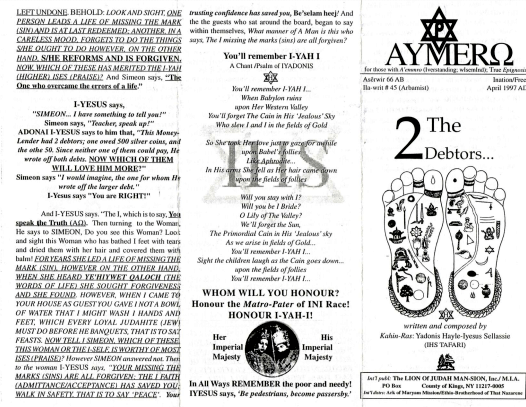 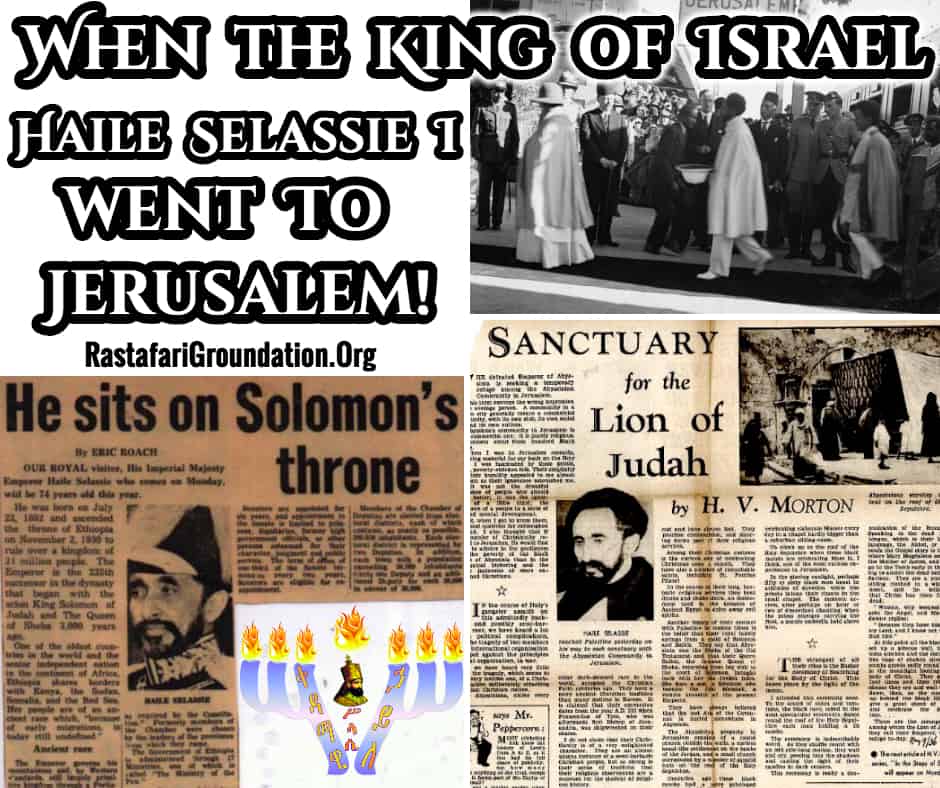 When the King of Israel Haile Selassie I went to Jerusalem!