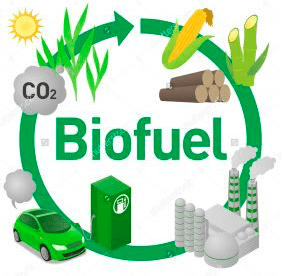 With all the focus directed to solar and wind power, it’s often overlooked that renewables also include turning biomass into biofuels.

Biomass remains the only renewable source that can be turned directly into liquid fuel.

That makes biofuels the only “renewable” power source that can directly fuel today’s cars, planes, and ships.

But how that translates into what we see in the marketplace has been a source of friction for years. This involves the system created 12 years ago that mandates how much ethanol must be mixed in the gasoline sold at retail nationwide.

The former states claim the mandated biofuel in gasoline restrains oil drilling. The latter regard the standards as a necessary support for farmers.

That fight is now coming to a head, but it looks like biofuel farmers and companies are safe.

Because they were just saved by someone you’d never expect…

What’s possibly even worse than the political fighting is that bringing biofuels into the gasoline mix has spawned its own version of “alphabet soup.”

The Renewable Fuel Standard (RFS) is the federal program that requires transportation fuel sold in the United States to contain a minimum volume of renewable fuels.

The RFS originated with the Energy Policy Act of 2005 and was expanded and extended by the Energy Independence and Security Act of 2007 (EISA).

The biofuel used in the mix is limited to 10% ethanol content for most gasoline and diesel sales. This limit is often referred to as the “blend wall.”

Raising it to 15% is seen by some as helping to meet the statutory minimums set out in EISA. But increasing it beyond 15% would require modifications to the fuel systems of conventional engines.

That’s because higher concentrations of ethanol damage the kind of internal combustion systems found in most automobiles.

The amount of ethanol used is also limited by the number of flex-fuel vehicles available. Flex-fuel vehicles are capable of operating on ethanol blends as high as 85% (E85), and the relative pricing of E85 as compared to regular gasoline with the 10% ethanol content (E10) can be problematic.

There is also another drawback. The more ethanol in the mix, the lower the performance, because ethanol on average provides only about 84% of the power of straight high-octane gasoline.

Other alternative fuels may have higher functional “blend walls.” Biobutanol may be legally blended up to 16%, operating as an E10 equivalent, though it is possible to operate at as high as 20% butanol without engine modification.

But these blends are not in wide use and have their own performance and pricing problems.

The EPA calculates a blending standard for each year based on estimates of gasoline usage calculated by the Department of Energy’s Energy Information Administration (EIA).

This entire system has strangely enough worked rather well. But it has hardly been shielded from political potshots…

The Biofuel System Is a Battleground Between Oil Drillers and Farmers

At the time of its creation, Congress justified RFS as a means of reducing greenhouse gas emissions and expanding the nation’s renewable fuels sector, while at the same time reducing reliance on imported oil.

Of course, that was a Congress controlled by a Democratic leadership intent on reducing reliance on oil products. It was also just at the dawn of a massive spike in domestic unconventional (shale and tight oil) production.

Today, the program is perceived in oil country as a restraint on local drilling, not as a tool to reduce national dependence on crude oil imports from abroad.

Meanwhile, significant portions of American farmland have come to depend on the growing of corn and other crops to service the ethanol component required for gasoline under RFS.

This is a political dispute that cuts to regional economic bases and interests. Yet there is an interesting difference between the political environment that spawned the biofuel standard and what exists currently.

Then, it was Congress under the control of Democrats.

Now the Republicans control both houses of Congress and the presidency. And to make matters even more interesting, the two constituent interests colliding over RFS (oil folks and farmers) both lean Republican.

Any official would be forgiven for thinking he or she is going to be tarred and feathered whichever side gets the upper hand. But it’s surprising to see what has transpired this time around.

In an unusual letter, EPA administrator Scott Pruitt promised to release the 2018 RFS mandate on time and not to reduce volumes below levels the agency proposed in July.

He also promised to deny a petition to move the law’s so-called point of obligation and drop an idea to allow ethanol exports to qualify for the RFS credits.

The decision is tantamount to leaving the RFS system unchanged, hardly what one would have expected from Pruitt, an Oklahoman and strong advocate of oil drilling.

However, the biofuel system is not out of the woods quite yet…

Things Are Looking Good for Farmers, but the Fight Isn’t Over Yet

Last week, a group of nine Republican U.S. senators from oil-refining states urged the Trump administration to reconsider what the senators called broad promises made to protect the RFS at the urging of farm-state senators and the biofuel industry.

That letter is addressed squarely to Donald Trump, arguing that the EPA action threatens American energy independence by stifling domestic drilling and will cost jobs.

Meanwhile, RFS credit prices have climbed 17% since Pruitt’s decision, indicating traders do not expect the administration to weaken the biofuel mandate in the near term.

That bodes well for farmers and companies involved in the biofuel industry.

Of course, when economic interests collide in American politics, anything is possible.